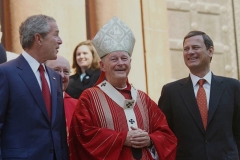 (CNSNews.com) - Chief Justice John Roberts submitted an independent opinion in the case of Dobbs vs. Jackson Women’s Health, in which he declared that he concurred in the court's judgement that Mississippi’s ban on abortions after 15 weeks of pregnancy was constitutional but said that he would not have overruled “the basic right” to an abortion.

“The Court’s decision to overrule Roe and Casey is a serious jolt to the legal system—regardless of how you view those cases,” said Roberts, who was appointed to the court by President George W. Bush.

“My point is that Roe adopted two distinct rules of constitutional law: one, that a woman has the right to choose to terminate a pregnancy; two, that such right may be overridden by the State’s legitimate interests when the fetus is viable outside the womb,” wrote Roberts. “The latter is obviously distinct from the former.

“I would abandon the timing rule, but see no need in this case to consider the basic right,” said Roberts.

“Whether a precedent should be overruled is a question ‘entirely within the discretion of the court,” said Roberts. “In my respectful view, the sound exercise of that discretion should have led the Court to resolve the case on the narrower grounds set forth above, rather than overruling Roe and Casey entirely.”

Roberts argued in his opinion that the real issue for the court should not have been whether there is a right to abortion but when in the course of a pregnancy a state should be able to restrict it. In Roe, the court ruled that abortion could not be restricted before the baby was “viable” and could live outside the womb.

Roberts argued that the viability line could be discarded and a new timeline set by the court so that Mississippi’s fifteen-week ban could stand---while also preserving a “right” to abortion before that.

“In urging our review, Mississippi stated that its case was ‘an ideal vehicle’ to ‘reconsider the bright-line viability rule,’ and that a judgement in its favor would ‘not require the Court to overturn’ Roe v. Wade,” wrote Roberts.

“Today,” he continued, “the Court nonetheless rules for Mississippi by doing just that.

“I would take a more measured course,” said Roberts.

“I agree with the Court that the viability line established in Roe and Casey should be discarded under a straightforward stare decisis analysis,” Roberts said. “That line never made any sense. Our abortion precedents describe the right at issue as a woman’s right to choose to terminate her pregnancy.

“That right,” said Roberts, “should therefore extend far enough to ensure a reasonable opportunity to choose, but need not extend any further—certainly not all the way to viability.

“Mississippi’s law,” said the chief justice, “allows a woman three months to obtain an abortion, well beyond the point at which it is considered ‘late’ to discovery a pregnancy.

“I see no sound basis for questioning the adequacy of that opportunity,” he said.

“None of this, however,” said Chief Justice Roberts, “requires that we also take the dramatic step of altogether eliminating the abortion right first recognized in Roe.”