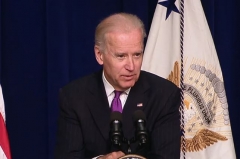 (CNSNews.com) - Speaking at the White House National Conference on Mental Health on Monday, Vice President Joe Biden told a sometimes serious and sometimes jocular story about the two brain surgeries he needed in 1988 to deal with cranial aneurysms.

Biden told the White House audience “they take a saw and they cut your head off” and “they literally had to take the top of my head off.” He also recounted that as he was being wheeled into surgery he asked the neurosurgeon, “What are my chances of getting off this table completely normal?” The surgeon told Biden he had a better chance of living—and that that chance was in the 35 to 50 percent range.

“The only totally un-chartered portion of the universe is the brain,” Biden said in his White House speech. “You know, as we used to say in the Senate, excuse the point of personal privilege here: I had two cranial aneurysms, and they literally had to take the top of my head off. I mean, they take a saw and they cut your head off, and go in to find the artery that is--one was leaking, the other that hadn't, before it burst.

“Those of you who are docs know every profession has their sick jokes,” said Biden. “The joke among docs is: How do you know someone's had a cranial aneurysm? On the autopsy table. Only 20 percent of the people have it even get to the table.

“Well, one of the fascinating things is, that the second operation, after the first one, which was a bleed, and they gave me a relatively low chance of surviving,” said Biden. “I remember going down, and asking the doc, and, you know, you’re counting the ceiling tiles and you’re heading into the operating room--a lot of you’ve been there. I said, ‘Doc, what are my chances?’ I had two great neurosurgeons. And I'll never forget--I will not mention his name, but he's one of the leading neurosurgeons in the world--he said: ‘Senator, for mortality or morbidity?’

“And I'm thinking,” said Biden. “No, swear to God, I mean, you know, jeez. Well, I said, ‘Let me put it to you this way.’ It was a long road to the operating room. I said--this is absolutely a true story--I said: ‘What are my chances of getting off this table and being completely normal?’ He said: ‘Well, your chances of living are a lot better.’

“I said: ‘What's the most likely thing that will happen if I live?’ He said, ‘Well, the side of the brain that the first aneurysm is on controls your ability to speak.’ And I thought: ‘Why in the hell didn’t they tell me this before the '88 campaign?’ It could have saved us all a lot of trouble, you know what I mean?”