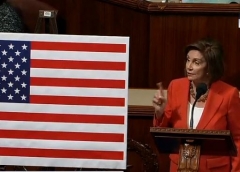 (CNSNews.com) - The Democratic-controlled House of Representatives voted on Thursday to continue its impeachment inquiry against President Donald Trump.

The roll call vote showed 232 members voting to continue the inquiry, 196 voting against it, and 4 not voting.

Two Democrats—Rep. Jefferson Van Drew (N.J.) and Rep. Collin Peterson (Minn.)—voted against the resolution. One Independent who was formerly a Republican—Rep. Justin Amash (Mich.)—voted for it.

“The resolution directs certain committees to continue their ongoing investigations as part of the existing House of Representatives inquiry into whether sufficient grounds exist for the House of Representatives to exercise its Constitutional power to impeach Donald Trump, President of the United States,” explains a report on the resolution published by the House Rules Committee on Wednesday, just one day before the House floor vote.

The resolution, said the report, “authorizes public hearings and the disclosure of deposition transcripts; and sets forth additional procedures in furtherance of the impeachment inquiry.

“The resolution,” the report said, “moves the House’s impeachment inquiry into the next phase while providing rights to the minority, including authorizing the ranking members of the House Permanent Select Committee on Intelligence and the Judiciary Committee to request subpoenas.

“In advancing the impeachment inquiry,” it said, “the resolution also provides for process rights for the President and his counsel, rights that closely mirror those provided during the Nixon and Clinton impeachment inquiries.”

House Speaker Nancy Pelosi (D.-Calif.) took to the House floor to defend the resolution and the impeachment inquiry it directed.

She argued that the inquiry on whether to impeach Trump was about defending the Constitution.

“We gather here on that opening day with our families gathered round to proudly raise our hands to protect and defend the Constitution of the United States. And, that is exactly what we are doing today,” Pelosi said.

She continued that it was a “prayerful” thing that was taking place on the House floor.

“Sadly, this is not any cause for any glee or comfort,” she said. “This is something that is very solemn, that is something prayerful. And, that we had to gather so much information to take us to this next step.”

Pelosi argued that no decision had been made yet to actually impeach Trump, but instead only to move forward with an inquiry on whether to impeach him.

“These actions, this process, these open hearings, seeking the truth and making it available to the American people, will inform Congress on the very difficult decisions we will have to make in the future as to whether to impeach the President,” she said.

“That decision has not been made. That's what the inquiry will investigate and then we can make the decision, based on the truth,” she said.

Pelosi then accused her Republican colleagues of being “afraid of the truth.”

“I don't know why the Republicans are afraid of the truth,” she said. “Every member should support allowing the American people to hear the facts for themselves. This--that is really what this vote is about. It’s about the truth.”

Pelosi said that American democracy was “at stake.”

House Minority Leader Kevin McCarthy (R.-Calif.) countered Pelosi and the Democrats by arguing that their move for an impeachment inquiry was driven by a desire to undo the legitimate political decision American voters had made in the last presidential election—and to influence the next presidential election.

“For the last three years, they have predetermined the president’s guilt,” McCarthy said of the House Democrats in his own floor speech. They have never accepted the voters’ choice to make him president. So, for 37 days and counting, they have run an unprecedented, undemocratic, and unfair investigation. This resolution only makes it worse.“

“Democrats are trying to impeach the President because they are scared they can’t defeat him at the ballot box,” McCarthy said on the House floor.

“This impeachment is not only an attempt to undo the last election — it is an attempt to influence the next one too,” he said. “If this approach becomes the new norm, it would be a disaster for democracy. The balance of power between the sovereign people and their representatives will shift further away from the people.”

In a statement that Republican members of the House Rules Committee appended to the committee’s report on the resolution for the impeachment inquiry, the Republicans cited ways they say the current inquiry departs from the more equitable procedural rules that were followed during the Nixon and Clinton impeachment proceedings.

“A key example of the failure of the Democratic Majority relates to the treatment of the president’s counsel,” said the minority’s statement. “Committee proceedings during the 93rd and 105th Congresses included the ability of the president’s counsel to attend all hearings, including those in executive session; question any witness called before the committee; submit written requests for additional testimony and precise summaries of what he would propose to show; and respond to evidence received and testimony presented either orally or in writing, as determined by the committee.

“The president’s counsel could also review all evidence obtained in the course of the impeachment inquiry,” the minority statement said.

But, the minority statement continued, the current resolution for an impeachment inquiry “bifurcates the impeachment and only allows the president’s counsel to participate in Judiciary Committee proceedings. Even then, the rights of the President’s counsel to participate are significantly limited to the discretion of the Chair, including providing the Chair the right to limit the scope and duration of any questioning.

“It provided no ability to participate in the ongoing investigation by the House Permanent Select Committee on Intelligence,” the statement continued. “This is particularly devoid of fairness as it is the HPSCI’s report and findings of fact that will presumably be the basis for any articles of impeachment brought by the Judiciary Committee, and thus due process would demand that president’s counsel be permitted to participate in all impeachment related hearings including those in the Intelligence Committee.”

The minority statement also pointed to the majority’s ability to limit the subpoena power of the minority.

“Another example deserving particular emphasis relates to the treatment of subpoena authority and the rights of the minority,” it says. “The 93rd and 105th Congresses authorized both the chairman and the ranking member of the Judiciary Committee to issue subpoenas, acting jointly or unilaterally. If either the chairman or the ranking member declined to act, the other had the right to refer the decision to the exercise subpoena authority in a specific circumstance to the whole committee.

The current resolution, the minority statement said, “represents a departure from this equitable arrangement and subjects the rights of the minority to the whims of the chairmen who have already shown themselves to be ill-equipped to act in a manner befitting their positions.”

“Merely paying lip service to due process, as H. Res. 660 does,” says the minority’s statement, “is beneath the dignity of this body and a disservice to the prior congresses who took seriously their responsibility to design an impeachment process that would elevate the debate and ensure that the treatment of the minority is a reflection of their equal standing under the Constitution.”