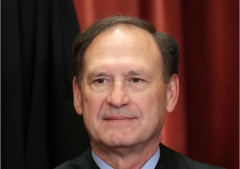 (CNSNews.com) - Justice Samuel Alito said today--during oral arguments in a case that pits the City of Philadelphia against the Catholic Church over the question of whether the city can force Catholic Social Services to give custody of foster children to same-sex couples--that “the City can’t stand the message that Catholic Social Services and the archdiocese are sending by continuing to adhere to the old-fashioned view about marriage.”

In fact, no same-sex couple had ever come to Catholic Social Services seeking to foster a child.

Further, the agency stipulated that if a same-sex couple did come to it seeking to foster a child, it would simply have referred the couple to one of the 28 other agencies in Philadelphia that do turn over foster children to same-sex couples.

Catholic Social Services argued in the Supreme Court that Philadelphia was discriminating against it because of its Catholic faith and, thus, was violating its First Amendment rights.

“If we are honest about what's really going on here, it's not about ensuring that same-sex couples in Philadelphia have the opportunity to be foster parents,” Alito told the lawyer arguing the case for the city.

“It's the fact that the city can't stand the message that Catholic Social Services and the archdiocese are sending by continuing to adhere to the old-fashioned view about marriage,” said Alito.

Neil Katyal, the attorney representing Philadelphis, denied that was the case.

According to briefs filed with the court in the case (Fulton vs. City of Philadelphia), the Catholic Church in Philadelphia has been caring for abandoned and orphaned children since the 1790s.

Here is a transcript of the part of today’s oral argument in the Supreme Court where Justice Alito said that the City of Philadelphia “can’t stand the message that Catholic Social Services and the archdiocese are sending by continuing to adhere to the old-fashioned view about marriage:

Justice Samuel Alito: "In your brief in opposition, when you were trying to persuade us not to take this case, you represented that the City had adopted an Exemption/Waiver Committee 'to ensure that in the future any requests for a religious exemption of the sort at issue here would be directed to the waiver exemption committee and handled through the procedures that it establishes.' Page 15.

Neil Katyal: "That is accurate, Your Honor, that we cite at page 15 that the City had established, after the events that gave rise to this case, in its Law Department, something to "address waiver and exemption requests." That's a general committee. That's not even about foster care agencies, not even about religion. It's a general committee for everything that looked to--"

Alito: "Well, the plain meaning of that statement is that if CSS or another religious organization came to the City and said that we do not --it is contrary to our religious beliefs to certify a same-sex couple, there would be consideration of an exemption."

Katyal: "--the City's policy -­the City's view on this has been clear from the start. They can't make exceptions on the basis of the Fair Practices Ordinance at all when it comes to things like this at the child --excuse me --at the parent pool stage.

"There are some exceptions that can be done under 3.21 at the matching stage, when the child is matched with an agency, but that's really just about DHS making an individual referral to a particular agency at that limited, particularized stage—"

Alito: "--if that's the City's policy, then the statement that I just read seems to me to be quite misleading, but I'll move on from that.

"Look, if we --if we are honest about what's really going on here, it's not about ensuring that same-sex couples in Philadelphia have the opportunity to be foster parents.

"It's the fact that the City can't stand the message that Catholic Social Services and the Archdiocese are sending by continuing to adhere to the old-fashioned view about marriage.

Katyal: "Absolutely not, Justice Alito. The text, of course, of all of this doesn't say anything like that.

"As the district court and third circuit found going evidence by evidence, piece by piece, they rejected that idea.

Alito: "Well, as far as the record reflects, no --what Catholic Social Services has done has not denied any same-sex couple the opportunity to be foster parents.

"And because they would refer such a couple, if one were to come to them, to one of the many agencies that is willing to --to do what is necessary for them, there's no realistic chance that that is ever going to happen.

"That's what the record shows, isn't it?"

Katyal: "Justice Alito, three things.  One, we are very happy to talk about the record because we don't think it supports that at all. Indeed, it supports that CSS told us that, if this happens, this is precisely what they would do. It did happen with respect to Bethany.

"Second, that was the exact colloquy you and I had many years ago in NASA versus Nelson when the petitioner said, hey, there's no evidence of drug abuse, you've got to wait for it. And your unanimous opinion for the Court said, no, the government can --it doesn't need to wait in order to act.

"And that's particularly so --and this is my third point here --because, here, the government has identified the most compelling of interests in protecting its own wards of the state. It needs to maximize the number of parents in the pool and avoid stigma to parents and to youth because the –­"