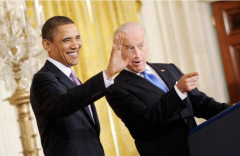 (CNSNews.com) - The 6.7 percent unemployment rate that the United States had in November was lower than the unemployment rate for any month during President Barack Obama’s first four years in office, according to the data published by the Bureau of Labor Statistics.

In fact, the unemployment rate never dropped below 7.7 percent in Obama’s first term in office, and was climbing upward as that term came to an end.

In January 2013, when Obama was inaugurated for his second term, the unemployment rate was 8.0 percent.

When Barack Obama was inaugurated in January 2009, the economy was in a recession that had started in December 2007 and would not end until June of 2009, according to the National Bureau of Economic Research.

In January 2009, the month of Obama’s first term began, the unemployment rate was 7.8 percent. By October of that year it had climbed to 10.0 percent.

Below are the seasonally adjusted monthly unemployment rates since January 2009 as published by the Bureau of Labor Statistics:

But then by January 2013, it had risen again to 8.0 percent.  By the end of 2013, the first year of Obama’s second term, it had dropped to 6.7 percent—the rate it saw in November of this year during the COVID-19 pandemic.

By the time that President Donald Trump was inaugurated in January 2016, the unemployment rate had dropped to 4.7 percent.

In March, with the COVID-19 pandemic underway, the unemployment rate increased to 4.4 percent. Then in April it spiked to 14.7 percent. But in May, it started down again, declining to 13.3 percent.

“Unemployed” people, as defined by BLS, are people 16 years and older who did not have a job in the past month but actively sought one.