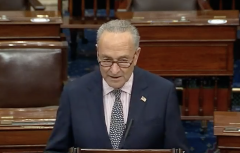 (CNSNews.com) - Senate Minority Leader Chuck Schumer (D.-N.Y.) went to the Senate floor on Thursday to “demand” that the Senate pass the HEROES Act, which the Congressional Budget Office says will add $3.445 trillion to the federal government’s deficit.

“I just took to the Senate floor to demand that we pass the House-passed, bipartisan HEROES Act,” Schumer said in a tweet he sent out after his floor speech.

“It fights for hazard pay for essential workers, state and local govts, our schools, testing and tracing, the unemployed, Medicaid, elections, renters, and more,” Schumer said.

“But the Senate blocked it,” Schumer said.

The Congressional Budget Office cost estimate of the HEROES Act said it would add $3.445 trillion to the deficit over 10 years. That included $1.719 trillion this fiscal year and $1.431 trillion next fiscal year. According to the CBO's analysis, provisions in this COVID-19-response bill would continue adding to the deficit through fiscal 2026.

In March, Congress passed the CARES Act in response to the COVID-19 pandemic. According to the Congressional Budget Office cost estimate for that law, it will add $1.7 trillion to the deficit over the next ten years.

If Congress enacts the HEROES Act, the two major COVID-19 response bills would add a combined $5.15 trillion to the deficit ($3.445 trillion plus $1.7 trillion).