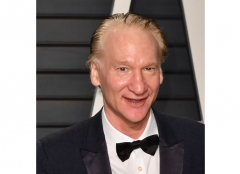 Bill Maher, the left-wing host of HBO’s Real Time with Bill Maher, said that Supreme Court-nominee Amy Coney Barrett, a devout Catholic, is a “f***ing nut” because of her religion and added that she “doesn’t believe in condoms.”

Maher, 64, is a lifelong bachelor and is notoriously anti-theist.

During the Sept. 25 edition of Real Time with Bill Maher, as documented and exposed by NewsBusters.org, Maher said of Amy Coney Barrett,

“But apparently the pick is going to be this omey, omey, Amy Coney (laughter). We’ll be saying this name a lot I’m sure because she is a f***ing nut!” (loud laughter)

Maher: “Religion. I was right about that one too.”

Maher: “Like, she doesn’t believe in condoms, which I guess she has in common with Trump. Because he doesn't either.”

Maher: “I remember that from Stormy Daniels.”

Amy Coney Barrett is a Catholic, and the mother of seven children, two of whom were adopted from Haiti.

In the past, Barrett was criticized by left-wing members of the Senate Judiciary Committee for her Catholic faith.

During the 2017 hearings held on her nomination to the 7th Circuit Court of Appeals, Sen. Diane Feinstein (D-Calif.) said to Barrett, “the dogma lives loudly within you.” Sen. Dick Durbin (D-Ill.), a pro-abortion Catholic, also attacked Barrett’s faith by asking her, “What’s an Orthodox Catholic?”