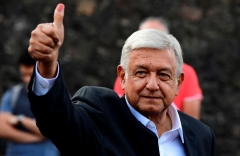 (CNS News) -- Although the liberal media in the United States and abroad refer to Joe Biden as the president-elect, Mexico's President Andres Manuel Lopez Obrador is declining to do so until the legal challenges to Biden’s claims of victory have been settled.

According to Reuters and other media, President Obrador stated at a news conference on Nov. 11, “We can’t make any kind of recognition of a government that is not yet legally and legitimately constituted. It’s not up to us, that’s interventionism.”

Many mainstream media outlets, including taxpayer-funded NPR, have criticized Obrador for his refusal to recognize Joe Biden as president-elect.

In a Washington Post opinion piece, Leon Krauze cites Nicolas Maduro and Miguel Diaz-Canal, both socialist dictators, along with Canada’s Justin Trudeau and France’s Emmanuel Macron as having recognized Biden as the winner.

Krauze further complained, “López Obrador has given in to Trump’s most outlandish demands, such as Mexico’s unprecedented militarization of its southern border or the country’s assistance with the Trump administration’s inhumane and controversial ‘Remain in Mexico’ policy.”

‘We’re adhering to our policy of principles,” Obrador said on Wednesday. “Also, we’re not a colony. We’re a free, independent, sovereign country. The Mexican government is not a puppet of any foreign government.”