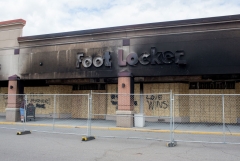 ST PAUL, MINNESOTA - JUNE 10: Rubble remains from businesses along University Avenue that were looted and burned in response to the killing of George Floyd by a Minneapolis police officer, June 10, 2020 in St Paul, Minnesota. (Photo by Andrew Lichtenstein/Corbis via Getty Images)

A Minneapolis business owner is leaving the city in the wake of violent protests that broke out after George Floyd’s death, resulting in his business being burned to the ground.

Kris Wryrobek, president and owner of 7-Sigma, Inc., has decided to relocate his business out of Minneapolis after rioters burned it down. 7-Sigma was located in South Minneapolis and had been in the city since 1987.

“They don’t care about my business,” Wryrobek said, “They didn’t protect our people. We were all on our own.” He went on to say that a fire engine was sitting at the scene and didn’t attempt to put out the fire.

Other business owners echoed Wryobek’s words. They say the city turned its back on them.

The destruction that took place in Minneapolis amounts to over $500 million dollars in damages. One-thousand businesses were damaged, and 52 of those were destroyed, the Star Tribune reported.

Wryrobek said that he is confident that his business will overcome, but that it would not be doing it in Minneapolis.

According to Business Insider, at least 4,400 people were arrested the weekend of Floyd’s death. Six states and 13 cities declared states of emergency. The National Guard was called into 21 states and Washington, D.C., and 26 cities in 16 different states have instituted curfews.

These riots, combined with the effects of the coronavirus, have deeply hurt national and local economies. Riots are hindering the economy’s comeback after the virus, and people are reportedly afraid to open their businesses due to rioting and looting. Some businesses that are beginning to open are dealing with broken windows or graffiti on top of other stressors.

"The fiscal hit from dealing with COVID-19 and the recent protests could lead to several government job losses as many states were already strapped for cash and have had difficulty secure federal aid. The economic recovery is fragile and violent protest across major US cities will make this rebound longer and flatter,” Edward Moya, Senior market analyst at Oanda, said.

All of these factors are causing citizens and businesses alike to relocate out of cities. According to Forbes, 5% of New York City’s residents (420,000 people) have already moved out of Manhattan as it is becoming more and more evident that it is dangerous to remain in the city.

USA Today found that 1/3 of Americans were considering moving out of the cities. Some of the pull was because of the cheaper costs of living and bigger spaces to live after being stuck indoors due to COVID-19. What drew people to the cities (entertainment, restaurants, etc.) are now all but gone with stay-at-home orders brought about by the virus and curfews instituted after the riots.

“People will be much more cautious about living in high-density areas with so many people nearby,” after what has gone on this year, said Lawrence Yun, chief economist at the National Association of Realtors.

Staying in the city could give businesses a higher chance of having to close their doors permanently because of COVID-19 and the riots. Forbes writer Jack Kelly wrote, “Those who are left behind will find themselves living in grimy, crime-infested places, plagued with virus outbreaks and violence.

“This will push even more people to leave, creating a downward spiral for the viability and habitation of the cities and increase the populations of states that offer a higher quality of life,” he wrote.