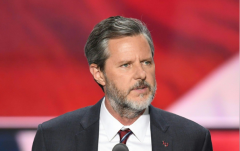 (CNSNews.com) -- Liberty University President Jerry Falwell, Jr. said more Evangelical Christians are in support of President Donald Trump in 2020 than in 2016, adding, “It wouldn’t surprise me if it was higher than 90 percent.”

Falwell has been a vocal Trump supporter since 2016. He said that although some Evangelicals may have thought he was crazy to back Trump in 2016, he believes the Evangelical vote will be much higher this election year.

“There’s no question about it,” Falwell said on Breitbart’s News Tonight. “The Evangelical support [for Trump] has strengthened. I have board members who travel. I have one board member who lost his legs in Vietnam. He travels from military base to military base, from church to church. He says everywhere he goes [he meets] people who were hesitant to vote for Trump in 2016, [but] Evangelicals are 100 percent behind him, now,”

According to a poll put out by Pew Research Center, 82% of Evangelicals said that if the election were today, they would vote for President Trump.

A Democracy Institute/Sunday Express poll supports the results found by the Pew Research Center. The Express poll showed that 90% of Evangelical Christians are in support of President Trump having a second term in office.

"‘We were hesitant. We thought you were a little nuts for supporting [Trump] in 2016, but we are 100 percent behind him, now,’” Falwell said. “It doesn’t surprise me a bit. It wouldn’t surprise me if it was higher than 90 percent.”

Falwell vocally supports the president on the campus of Liberty University.  Students are able to register to vote and vote in-person on campus.

In addition, Falwell urges students to educate themselves about politics, policy, and government, and he usually invites political speakers to the school’s convocation, which reportedly is the largest weekly gathering of Christian young people in the world.