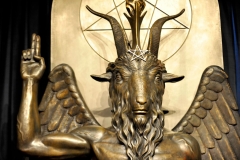 The Baphomet statue is seen in the conversion room at the Satanic Temple where a "Hell House" is being held in Salem, Massachusett on October 8, 2019. (Photo by JOSEPH PREZIOSO/AFP via Getty Images)

A Satanic Temple in Mississippi sent a letter warning that they will sue if the new state flag includes the phrase “In God We Trust,” saying that it is an “exclusionary religious phrase.”

The state of Mississippi voted to retire their current state flag, which has included an image of the Confederate flag for 120 years, on June 28, 2020.

When Mississippi Gov. Tate Reeves (R) signed it into law, the law stated that the new flag could not have any images or references to the Confederacy and must include the national phrase “In God We Trust.” Mississippi voters will have the opportunity to vote for the new flag’s design in November 2020.

“In God We Trust” has been the national motto of the United States since 1956, but has been in use since the late 1800s.

A week after Reeves signed the law and announced the stipulations for the new flag, Attorney General Lynn Fitch received a letter from a Satanic Temple threatening to sue if the national motto is included on the flag.

The letter started off by thanking the governor for removing the Confederate emblem. They then said that they did not believe “In God We Trust” should be included on the new flag because it didn’t represent all of the people who lived in the state.

They said, “removing  one  divisive  symbol  of  exclusion  only  to  replace  it  with a divisive  phrase of exclusion does not eliminate exclusion, but rather moves it from one group to a collection of others.”

The group went as far as to say that they believed the seven tenets of the Satanic Temple were more in line with the state’s beliefs “than the Ten Commandments” and said that if the new flag was going to have a reference to God, then it “should include a reference to Satan.”

The letter continued by saying, “On the other hand, we can imagine that there would be some Mississippians who would be a bit put off by the words ‘In Satan We Trust’ on the state flag. If you can imagine that, then you might imagine how atheists, Satanists, and other people of nontheistic faiths could feel excluded by the addition of ‘In God We Trust’ to the state flag.”

In their letter, the Satanic Temple said, "However, should the state of Mississippi insist on placing this exclusionary religious phrase on its flag, we do intend to file suit and seek injunctive relief against this act."

They went on to say that they didn’t believe that former Supreme Court cases that ruled the national motto does not “infringe on First Amendment rights” had any precedent for this case.