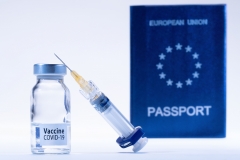 In a Sunday interview with the New York Times, Ursula von der Leyen, president of the European Commission, said that Americans would be able to visit Europe this summer, provided they have been fully vaccinated and have some form of a "vaccine passport," details of which are still being discussed.

“The Americans, as far as I can see, use European Medicines Agency-approved [EMA] vaccines,” von der Leyen told The Times. “This will enable free movement and the travel to the European Union."

The approved vaccines for Europe are the Moderna, Pfizer/BioNTech and Johnson & Johnson brands.

"One thing is clear," added von der Leyen, "All 27 member states will accept, unconditionally, all those who are vaccinated with vaccines that are approved by E.M.A."

Von der Leyen did not provide a timeline for the U.S. travel to Europe to recommence, but she said the U.S. is doing very well with its vaccination program. It will depend "on the epidemiological situation," she said, "but the situation is improving in the United States, as it is, hopefully, also improving in the European Union.”

As for a vaccine passport or document that proves one has been fully vaccinated, "discussions have been going on for several weeks between European Union and United States officials on how to practically and technologically make vaccine certificates from each place broadly readable so that citizens can use them to travel without restrictions," reported The Times.

"The European Union itself has begun the process of furnishing its own citizens with 'digital green certificates,' which will state whether the traveler has been vaccinated against Covid-19; has recovered from the disease in recent months; or has tested negative for the virus in the past few days," said The Times.

"Europeans will be able to use those to travel without added restrictions, at least in principle, within the bloc of 27 nations," reported The Times.