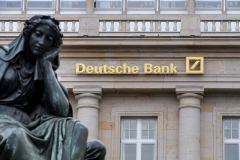 Deutsche Bank AG and Signatue Bank, "two of Trump's favored lenders," announced this week that they are severing all banking connections with the president and his businesses, reported Bloomberg News.

Trump's businesses owe an estimated $300 million to Deutsche Bank AG, and signature Bank is closing a $5.3 million Trump account. Signature has also called on the president to resign, said Bloomberg.

“We believe the appropriate action would be the resignation of the president of the United States, which is in the best interests of our nation and the American people,” said Signature in a Jan. 11 statement. “We have never before commented on any political matter and hope to never do so again."

"The lenders are following social media outlets and other companies in suspending ties with the president," reported Bloomberg.

"Deutsche Bank has faced scrutiny over its ties to Trump throughout his presidency," said the news service. "It was so concerned about its exposure after his election, it considered restructuring the loans but ultimately decided not to do new business with him during his presidency.