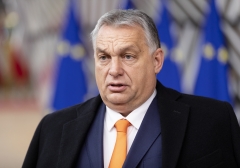 In a vote of 157 to 1 on Tuesday, the National Assembly of Hungary passed a law that prohibits pro-LGBT materials from being used in schools educating people under the age of 18.

The new law was passed as an amendment to an anti-pedophilia bill, and it explicitly bans "content that depicts sexuality for its own sake, or promotes or displays deviations from the identity of the sex of birth, gender reassignment or homosexuality."

Explaining the reason for the law, a Hungarian government spokesman told The Guardian, “There are contents which children under a certain age can misunderstand and which may have a detrimental effect on their development at the given age, or which children simply cannot process, and which could therefore confuse their developing moral values or their image of themselves or the world."

The ruling party in Hungary, an alliance of the Fidesz and KDNP, is committed to strengthening and preserving Hungary's Christian culture. The prime minister, Viktor Orban, is in his third term, having first been elected in 2010.  The next election is in 2022.

Last year, Orban denounced LGBT indoctrination of children as a "red line not to cross."

"To sump up my opinion, leave our children alone," he said.

Anna Donath, a member of the Hungarian opposition who also serves in the European Parliament, said, “The law is incompatible with the fundamental values of European democratic societies as well as the values of the Hungarian citizens and is only the latest of many shameful attacks on LGBTIQ rights by Viktor Orbán’s government."