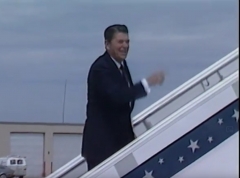 A similar video of President Joe Biden, made today, when Biden is 78 years old, showed the president falling three times while trying to climb the stairs of Air Force One.

When Reagan was running for President at 69 years of age, the New York Times repeatedly reported on assertions that he was “too old” for the job.

The Times published another story story on Sept. 20, 1980, saying: “While some voters see Mr. Reagan as too old, others fear that he might be too inexperienced, and, here again, Mr. Carter's record works against his challenger. People here seem in no mood to elect another outsider with no knowledge of Washington.”

In a story published on Inauguration Day in 1981, the New York Times said:

“An electorate pummeled by inflation at home and insult abroad seemed ready to hear that old-fashioned message from a 69-year-old candidate who, as the 1980 campaign began, was widely dismissed as too old and too conservative to win.