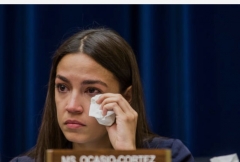 Rep. Alexandria Ocasio-Cortez (D.-N.Y.) sent out a tweet on Saturday expressing her “solidarity” with Palestinians who were clashing with Israeli police in Jerusalem.

“We stand in solidarity with the Palestinian residents of Sheikh Jarrah in East Jerusalem,” Ocasio-Cortez said in a tweet.

“Israeli forces are forcing families from their homes during Ramadan and inflicting violence,” she said.

The Jerusalem Post described what happened in that city over the weekend as follows:

“Over 100 Palestinians were injured in clashes with Israeli security forces in Jerusalem on Saturday night and Sunday morning, amid violent riots throughout the capital and the West Bank, fueled by tensions surrounding planned evictions in east Jerusalem.

“Over 90,000 worshippers visited al-Aqsa Mosque on Saturday night to mark Laylat al-Qadr (Night of Power), which commemorates the night that Muslims believe the Quran was first revealed to the Prophet Mohammed.

“On Sunday morning, clashes broke out on the Temple Mount between Palestinians and Israeli forces, with the doors of at least one of the gates to the compound being closed amid the clashes. At least 10 people were injured."