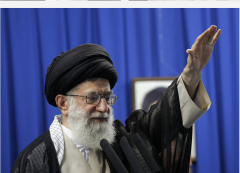 “Bolton and Trump have been thrown into history’s trash can,” the Ayatollah says in the text of the tweet.

The video footage that Ayatollah uses of Bolton comes from The Grand Gathering for a Free Iran that was held in Paris, France in July 2017. Bolton would not become Trump’s national security advisor until April 2018 and would leave that position in September 2019.

In his 2017 speech at the Grand Gathering for a Free Iran, Bolton predicted an imminent regime change in Tehran.

“Now, there is underway, as there often is in a new American administration a policy review to determine what U.S. policy will be on a whole range of issues, including how to deal with the regime in Tehran,” Bolton said at that gathering.

“The outcome of the president’s policy review should be to determine that the Ayatollah Khomeini’s 1979 revolution will not last until it’s 40th birthday,” Bolton said.

At the end of his speech at that 2017 conference, Bolton says: “I have said for over ten years since coming to these events that the declared policy of the United States of America should be the overthrow of the mullahs’ regime in Iran.  The behavior and the objectives of the regime are not going to change, and therefore the only solution is to change the regime itself. And that’s why, before 2019, we here will celebrate in Tehran.”

[Here is video of the full speech John Bolton gave at the conference in Paris on July 2, 2017:]

The video tweeted out by the Ayatollah Khameini starts with the ending of Bolton’s speech. It shows Bolton—tinted in yellow—saying: “Before 2019, we here will celebrate in Tehran.”

The Ayatollah’s tweeted video then cuts to another clip of Bolton—still tinted yellow—saying: “The Ayatollah Khomeini’s 1979 revolution will not last until it’s 40th birthday.”

In the middle of this last statement, the Ayatollah’s video cuts to a video image of the Jan. 6 crowd in front of the U.S. Capitol. It then shows some of the rioters inside one of the congressional chambers, breaking and climbing through a window of the Capitol, racing through corridors of the Capitol building and pounding on doors, and people outside the Capitol throwing smoke bombs. It also shows members of Congress evacuating the congressional chambers and a Capitol police officer shooting Ashli Babbit as she tried to climb through a broken door inside the Capitol.

As it shows these images, the video repeats statements from Bolton: “1979 revolution will not last until it’s 40th Birthday.” “Before 2019, the people here will celebrate in Tehran.”

The Ayatollah’s video then shows National Guard gathered outside the Capitol and sleeping on a floor within it.

Finally, it shows Joe Biden being sworn in as the new president in front of the Capitol.

The image bearing the Ayatollah’s video does not initially appear with his tweet on his twitter feed. Instead, there is a message from twitter that says: “The following media includes potentially sensitive content.” There is then the word “View” to the right. When a person click’s “View,” the video appears.