Bernie Sanders on Origin of Christmas: ‘It Was the Labor Movement That Brought You the Holiday Weekend’ 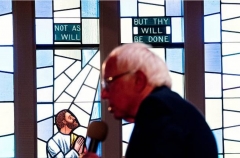 Sen. Bernie Sanders of Vermont at the Allen Temple Baptist Church in Oakland, Calif., May 30, 2016. (Photo by Josh Edelson/AFP via Getty Images)

Sen. Bernie Sanders of Vermont sent out a tweet on Friday, which was Christmas Eve, saying: “It was the labor movement that brought you the holiday weekend.”

The day before that Sanders had sent out a tweet saying: “The Democratic Party must once again become the party that stands up for the working class in this country.

On Christmas Day, Sanders sent out a tweet wishing people a “merry Christmas.”

“Jane and I wish you and yours a very safe and merry Christmas,” Sanders said. “I am absolutely confident that, as we stand together, we will defeat this pandemic and move our country and world forward toward peace, justice and environmental sanity.

“Keep the faith,” Sanders said in completing his tweet.