Biden on Catholicism: ‘My Idea of Self, of Family, of Community, of the Wider World Comes Straight from My Religion’ 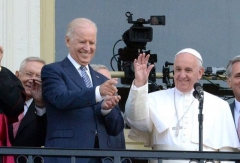 Former Vice President Joe Biden, who becomes the Democratic nominee for president today, wrote in his 2008 book “Promises to Keep: On Life and Politics” that his life was shaped by his Catholic faith.

Jack Jenkins of the Religion News Service published a story about Biden’s Catholicism this week that quotes a passage from the book.

Penguin Random House, who published the book, have also placed an excerpt of it online--that includes the same passage that the Religion News Service quoted.

In the full paragraph that includes the quote that was used in the Religion News Service article, Biden says:

“I entered the third grade at Holy Rosary, a Catholic school half a mile down the Philadelphia Pike where the Sisters of Saint Joseph eased me into my new world. They were the link between Scranton and Claymont. Wherever there were nuns, there was a home. I’m as much a cultural Catholic as I am a theological Catholic. My idea of self, of family, of community, of the wider world comes straight from my religion. It’s not so much the Bible, the beatitudes, the Ten Commandments, the sacraments, or the prayer I learned. It’s the culture. The nuns are one of the reasons I'm still a practicing Catholic."

The image below is a screen capture of the paragraph in Joe Biden's "Promises to Keep: On Life and Politics" that is quoted above:

Biden, as demonstrated in statements published on his campaign website, is running for president this year as a champion of legalized abortion on demand, federally funded abortion, same-sex marriage, transgenderism, and requiring health-insurance plans to cover abortion-inducing drugs and devices even if the business owner paying for the plan has a moral or religious objection to that.