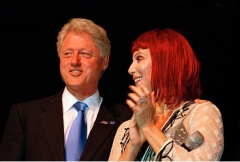 “JOE BIDEN IS NOT JUST THE ‘RIGHT MAN’ RUNNING FOR PRESIDENT…HE’S THE ‘ONLY MAN” RUNNING,’” Cher had said in a tweet she sent out on Oct. 10.

That tweet included a video of the advertisement Cindy McCain, the wife of the late Sen. John McCain, did to endorse Biden for president.

In a tweet sent out on Wednesday, Cher said: “Going Nevada & Arizona to speak on behalf of BIDEN HARRIS.”

The Arizona Republic posted a story online on Thursday that carried the headline: “You better believe Cher is coming to Arizona to campaign for Biden. Here’s what to know.”

“A press release from the Biden campaign confirmed the news.

“‘This weekend, award-winning singer and actress Cher will travel to Nevada and Arizona to campaign on behalf of Joe Biden and Kamala Harris,’ it says.