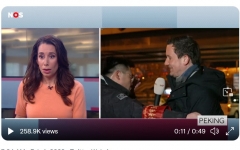 A security officer for the Communist Party-controlled People’s Republic of China dragged a Dutch television reporter away from the camera as he was broadcasting a live report about the Beijing Olympics from a street near the Olympic site.

The Daily Mail reported it this way:

“A Dutch reporter covering the Beijing Winter Olympics was captured being dragged away by Chinese security live on air, before the opening ceremony could even finish.

“Sjoerd den Daas, a correspondent for NOS Journaal, was covering the long-awaited opening of games in China when a man wearing a red armband entered the frame and grabbed the journalist by the shoulders.

“Mr den Daas attempted to continue his broadcast but was pulled away, in an example of one of China's latest tactics at intimidating foreign reporters.”

After the incident, NOS sent out a tweet about what happened with a video of it. The tweet, translated into English by Google Translate, said:

"Our correspondent @sjoerddendaas was pulled away from the camera live in the NOS Journaal at 12.00 pm by security guards. Unfortunately, this is increasingly becoming a daily reality for journalists in China. He is fine and was able to finish his story a few minutes later”