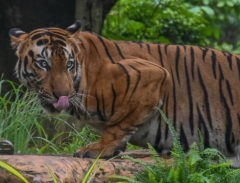 A report published in the Kathmandu Post and cited by The Guardian says that the recovering Bengal tiger population in Nepal has killed 62 human beings in the last three years.

“Over the last three years there have been 104 tiger attacks inside protected areas and 62 people have been killed, according to the Kathmandu Post,” the Guardian reported today.

The Guardian story carried this headline: “Nepal’s tiger numbers recover but attacks on people cause alarm.”

The subhead of the article said: “Nepalese population of Bengal tigers has nearly tripled in 12 years and conflict with humans is increasing.”

“From a low of 121 in 2010, the Nepalese population of Bengal tigers has risen to 355, according to the latest survey, revealed by the prime minister, Sher Bahadur Deuba, to mark International Tiger Day on Friday,” said the Guardian.

The story in the Kathmandu Post was headlined: “As tiger numbers rise, experts stress protecting habitats and prey base, reducing conflict with humans.”

In June, the Kathmandu Post carried a story that was headlined: “Mob vandalizes Chitwan park’s office after tiger kills woman.” The story said:

“A mob vandalised the eastern sector office of Chitwan National Park in Sauraha following the death of a local woman in a tiger attack.

“After the woman from Ratnanagar Municipality-5 was fatally mauled by the tiger inside Janakauli Buffer Zone Community Forest, the people from her neighbourhood had reached the park’s office demanding retrieval of her body from the forest.

“They resorted to vandalism, blaming the park authority for not retrieving the body immediately after the incident, said Ananath Baral, the chief conservation officer of the park. …

“Deputy Superintendent of Police Surya Thapa said the victim, who was in her thirties, had gone to the forest to collect fiddlehead ferns.”