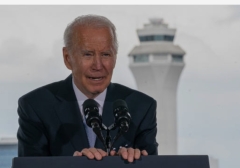 (CNSNews.com) - The Gallup polling company posted a story on its website today, noting that President Joe Biden’s job approval has been averaging in the low 40s for the past two quarters.

In the years since President Dwight Eisenhower was in office, according to Gallup’s polling, the only president who has had a lower job approval average in the fifth quarter of his presidency was President Donald Trump.

“During Joe Biden's fifth quarter in office, which began on January 20 and ended on April 19, an average of 41.3% of U.S. adults approved of the job he was doing as president. The latest average is essentially unchanged from the 41.7% in his fourth quarter but significantly lower than his first three quarterly averages,” said Gallup.

“Gallup's latest update on Biden's job approval, from an April 1-19 survey, finds 41% of Americans approving and 56% disapproving of the way Biden is handling his job as president,” Gallup said.

“From a historical perspective, Biden's fifth quarter average is lower than that of any prior elected president, except Donald Trump. Trump averaged 39.1% during his fifth quarter,” said the polling company.