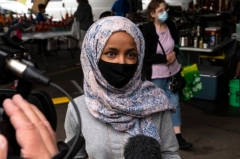 Rep. Ilhan Omar (D.-Minn.) sent out a tweet on Wednesday afternoon attacking President Joe Biden for being what she apparently deems overzealous in seeking to secure the U.S.-Mexico border.

“It’s shameful and unacceptable for @POTUS to continue the construction of Trump’s xenophobic and racist wall,” Omar said.

The Democratic congresswoman was apparently referencing a story that appeared Monday in the Washington Times. It was headlined: “Biden’s DH may restart border wall construction to plug ‘gaps.”

“Department of Homeland Security Secretary Alejandro Mayorkas told department employees he may restart border wall construction to plug what he called ‘gaps’ in the current barrier.

“In a conversation with Immigration and Customs Enforcement employees last week Mr. Mayorkas was asked about his plans for the wall and he said that while President Biden has canceled the border emergency and halted Pentagon money flowing to the wall, ‘that leaves room to make decisions’ on finishing some ‘gaps in the wall.’

“Mr. Mayorkas, according to notes of the ICE session reviewed by The Washington Times, said Customs and Border Protection, which oversees the wall, has submitted a plan for what it wants to see happen moving forward.”