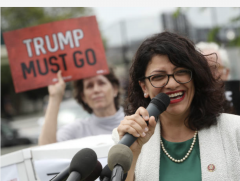 Rep. Rashida Tlaib (D.-Mich.) sent out a tweet referring to a demonstration at the Michigan state capital yesterday—that was protesting the state’s COVID-19 state of emergency--in which she said that “Black people get executed by police for just existing.”

“Black people get executed by police just for existing, while white people dressed like militia members carrying assault weapons are allowed to threaten State Legislators and staff,” Tlaib said in her tweet.

Her tweet forwarded a tweet by Rod Meloni, a local television reporter, that included a video of protestors at the Michigan capital and said: “Protest moves inside Michigan Capitol. Crowd attempts to get into Hoise [sic] floor. Lots of Michigan State Police and House sergeant at arms blocking the door.”

CNN published a story about the protest that quoted a spokesman for the Michigan state police. The CNN story said:

“Scores of demonstrators were allowed into the Capitol--which has been closed to tourists--but due to social distancing rules in place, only 275 people were allowed inside at a time, according to Lt. Brian Oleksyk, a spokesman for the state police.

“Oleksyk said it was a very peaceful protest. "They were chanting peacefully and that was it," he said.

“But state Senator Dayna Polehanki tweeted that protesters were directly above her, ‘men with rifles yelling at us.’

"‘Some of my colleagues who own bullet proof vests are wearing them. I have never appreciated our Sergeants-at-Arms more than today,’ she added.

“A photo she included in her tweet shows four men, at least two of whom have rifles.”

In explaining the protest, the CNN story said: “Protesters at the Michigan Capitol on Thursday jammed inside the building where the lawmakers were meeting, demanding an end to the state's state of emergency.”