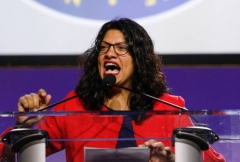 Rep. Rashida Tlaib (D.-Mich.) sent out a tweet today criticizing Israel’s handling of Palestinian riots in Jerusalem over the weekend and pointing out that she first prayed at the Al Aqsa Mosque, which sit on the Temple Mount, when she was seven years old.

Both Tlaib’s parents were Palestinian immigrants and her father came from East Jerusalem.

“I was 7 years old when I first prayed at the Al Aqsa with my sity,” Tlaib said in her tweet. “It’s a sacred site for Muslims.

“This is the equivalent to attacking the Church of the Holy Sepulchre for Christians or the Temple Mount for Jews,” she said.

In her tweet, Tlaib challenged President Joe Biden to express outrage at what has happened in Jerusalem.

“Israel attacks it during Ramadan. Where’s the outrage @POTUS,” she said.

In another tweet, Tlaib said: “Al-Aqsa is the 3d holiest site in Islam, & people praying during the holiest days of the holy month of Ramadan have been beaten, gassed, shot, & killed by Israeli forces. They are denied medics & forced to use prayer mats as stretchers.

“A place of peace desecrated by violence,” she said.

“Too many are silent or dismissive as our U.S. tax dollars continue to be used for this kind of inhumanity,” Tlaib said in yet another tweet.

“I am tired of people functioning from a place of fear rather than doing what’s right because of the bullying by pro-Israel lobbyists,” she said.

“This is apartheid, plain and simple,” she said.