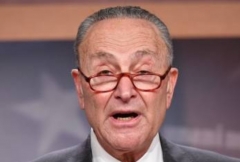 Senate Majority Leader Chuck Schumer (D.-N.Y.) expressed his excitement in a tweet on Sunday about the deal that has come together in the New York state legislature to legalize recreational marijuana.

“BIG: Leaders in Albany just announced a deal to legalize marijuana and work to repair the harm of prohibition,” Schumer

“I look forward to seeing leaders in equity and justice appointed to lead the new entities this bill creates,” he said.

The Associated Press published a story on Sunday summarizing the deal New York legislators have made. It said:

“New York is poised to join a growing number of states that have legalized marijuana after state lawmakers reached a deal to allow sales of the drug for recreational use.

“The agreement reached Saturday would expand the state’s existing medical marijuana program and set up a licensing and taxation system for recreational sales. Lawmakers are expected to vote on the bill Tuesday, the earliest they could consider it. …

“It has taken years for the state’s lawmakers to come to a consensus on how to legalize recreational marijuana in New York. Democrats, who now wield a veto-proof majority in the state Legislature, have made passing it a priority this year, and Democratic Gov. Andrew Cuomo’s administration has estimated legalization could eventually bring the state about $350 million annually.”