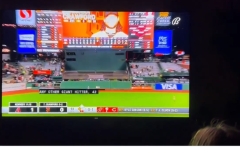 When San Francisco Giants shortstop Brandon Crawford came up to hit in the bottom of the ninth inning on Tuesday night, it was almost 10:00 p.m., but his four young children were still awake and watching his at-bat on television.

The Giants were down 1-0 to the Arizona Diamondbacks, and had a runner on third base.

The first pitch to Crawford was a strike. Crawford then struck the second pitch and sent a towering drive to dead center field—that flew over the fence as walk-off homerun.

Walk off baby! They may be tired at school tomorrow 😜 pic.twitter.com/FqnFw1aDwI

Crawford’s wife, Jalynne Crawford, was videotaping her children at the Crawford home as they watched their father’s at bat.

The video preserved a classic moment—which Jalynne Crawford then sent out on twitter.