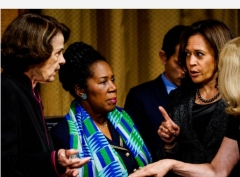 The New York Times published a report on Tuesday that revealed the “blunt” things that senior Democrats have been saying in private about Democratic Sen. Dianne Feinstein of California.

“Senior party officials have been blunt in private about what they describe as the senator’s diminished acuity and are eager to replace her with a Black woman, of which there are none in the Senate after the departure of Vice President Kamala Harris,” the Times reported.

The Times also reported that “Progressive Democrats” may think that Feinstein is too polite to be a good senator.

“Progressive Democrats have also suggested that Ms. Feinstein’s decorous approach was ill-suited for dealing with the increasingly acrimonious partisan politics in Congress,” said the Times. “They were particularly upset during the Supreme Court confirmation hearings of Justice Amy Coney Barrett last fall when Ms. Feinstein praised the way Republicans had handled the hearings. Soon afterward, Mr. Schumer and other Democrats persuaded her not to seek the leadership role on the Judiciary Committee.”

Feinstein, meanwhile, is insisting she will serve out her term, which has another four years.

“On Tuesday, Ms. Feinstein was emphatic that she would serve the remainder of her term, which lasts until 2025, and brushed aside questions about her fitness,” the Times reported. “‘Absolutely,’ she told reporters in the Capitol when asked if she was able to serve fully. ‘I think that’s pretty obvious.’”