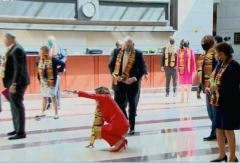 House Speaker Nancy Pelosi (D.-Calif.) on Monday took a knee in the U.S. Capitol for 8 minutes and 46 seconds to honor George Floyd and others who “were abused by police brutality.”

But at the end of the kneeling session, as captured by CSPAN’s camera, she had trouble standing up.

She reached out to someone to help her and a woman standing nearby immediately came to her assistance—as did House Majority Leader Steny Hoyer (D.-Md.).

“It’s better not to have on high heels,” Pelosi said as she was helped to stand.