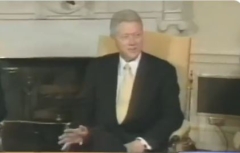 As the debate over the definition of “recession” rages now that the nation has suffered two consecutive quarters of GDP contraction under the Biden Administration, former President Bill Clinton’s definition is gaining renewed attention.

"A recession is two quarters in a row of negative growth," then-President Clinton declared on December 19, 2000 in a White House press event held with President-elect George W. Bush.

As UPI reported at the time, Pres. Clinton was expressing more optimism about prospects for the Bush economy than the incoming president, himself:

“Clinton, who on the campaign trail regularly warned supporters about the dangers of the economic policies proposed by Bush and the Republican Party, expressed confidence about the nation's continued strong economic performance. Bush had said Monday after a meeting with top Congressional leaders, ‘The potential economic downturn is perhaps more real today than it was a year ago.’

"Well, a recession is two quarters in a row of negative growth," Clinton said. "I don't think we're going to have that. But we couldn't keep up 5 percent growth a year, you know, forever," but most top economists "think that growth will be 2.5 percent or better next year, and that'll keep unemployment low."