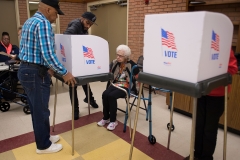 President Joe Biden and fellow Democrats claim that voter I.D. requirements, such that in Georgia’s new law, discriminate against minorities. But, 73% of Black voters and 81% of other Non-White voters say requiring a photo I.D. is necessary to ensure fair and secure elections, a new Rasmussen survey finds.

Are laws requiring voters to show photo identification such as a driver’s license before being allowed to vote necessary to “a fair and secure election process”?

What’s more, three times as many Black voters support (73%) as oppose (24%) requiring a photo I.D. and, for other Non-White voters, support (81%) is more than six times greater than opposition (13%). Among White voters, the requirement is favored 74%-19%, with the remainder “not sure.”

Rasmussen also asked the following question to gauge support for boycotts against states that require voters to provide identification:

Some people have called for a boycott of businesses in Georgia, which recently passed an election law   requiring voters to show identification. Do you support or oppose such a boycott?

More voters (50%) said they oppose such boycotts than voiced approval (37%), while 13% were uncertain.

But, 69% of those who said that voter identification is not necessary to ensure fair and secure elections also said they support boycotts of states that impose I.D. requirements. Other groups voicing strong support for boycotts include self-described liberals (52%) and those earning more than $200,000 a year (53%).

Rasmussen's findings are supported by those of a national survey of U.S. voters conducted by the Honest Election Project, which revealed that 77% support voter I.D. requirements, including strong majorities of Blacks (64%) and Hispanics (78%). This survey also found that 64% of voters "want to strengthen voting safeguards to prevent fraud, rather than eliminate them to make voting 'easier.'"