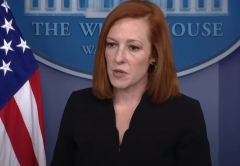 On Monday, White House Press Secretary Jen Psaki was asked why President Joe Biden didn’t follow in the footsteps of past presidents, like Barack Obama, in commemorating the anniversary of D-Day on June 6, the actual date that the Allied Forces invaded Normandy in 1944.

“Presidents Bush, Obama and Trump all commemorated D-Day anniversaries on D-Day. On the D-Day anniversary, why didn’t President Biden?” a reporter asked Psaki at a press briefing.

Psaki answered that D-Day “is something the president has spoke to many, many times in the past” and that she wouldn’t be surprised if he had more to say about it:

“Well, I can tell you that, certainly, his value for the role that the men who served on D-Day and the memory of them, the families who have kept their memories alive over the course of years on this day is something the president has spoke to many, many times in the past.

“It’s close to his heart and I wouldn’t be surprised if there’s more he would have to say on it.”

While Biden did not commemorate the 77th anniversary of D-Day on Sunday, he did commemorate another anniversary – that of the 1921 Tulsa Race Massacre, Townhall reports:

June 6 marked the 77th anniversary of D-Day, but you wouldn’t know it if you followed any of the White House or President Biden’s social media accounts. The commander in chief completely neglected to mention the U.S.-led invasion of Normandy in World War II on Sunday, tweeting instead a video of him meeting with survivors of the Tulsa Race Massacre.

On the evening of June 6, 1944, the day that Allied forces landed at Normandy, Democrat President Franklin Delano Roosevelt went on radio and commemorated the event by offering a prayer for the U.S. and Allied troops that had landed at the French beach to liberate Europe during World War II.