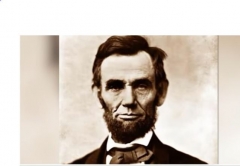 Lincoln was shot dead on April 14, 1865 by actor John Wilkes Booth, a Confederate, as Lincoln entered the presidential box at Ford's Theatre in Washington D.C., shortly after the end of the Civil War.

“As many try to brand Abraham Lincoln as a 'racist,' remember his great work and, though he was not perfect, stop trying to cancel him,” Cribb, author of “Old Abe: A Novel,” says in his USA Today opinion piece.

“Forcing 21st century standards on people who lived decades or centuries ago is a slippery and self-centered business,” Cribb warns. And, even though he had his flaws, “Lincoln was a great man who lived an extraordinary life that came to a tragic end 156 years ago this week,” he says.

“Instead of complaining that such American icons were not woke enough, perhaps we should ask ourselves whether we, as a nation, are sufficiently grateful for their deeds,” Cribb concludes.

While some liberals criticize Pres. Lincoln for seeking voting rights for some, but not all Blacks, his actions were actually those of a shrewd politician who opened the door to extend voting rights to every Black American, Cribb notes:

“A CNN reporter recently wrote that “in some circles, ‘Honest Abe’ is increasingly becoming Racist Abe.”

“But Lincoln was deeper and wiser than his critics realize. In this case, by suggesting voting rights for a limited group of Black people, he was opening a new front in the battle for civil rights.”

“Once the right was secure for some Blacks, it would be easier to extend it to others.”