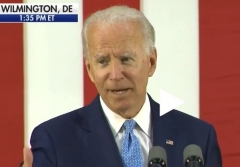 Former Vice President Joe Biden says he’s cancelled all campaign rallies due to fears of the coronavirus – but, he’d rather “be out there with the people” because that gives him “the greatest feel.”

In Wilmington, Delaware on Tuesday, Biden held his first press conference in nearly three months and announced that he won’t hold any more rallies, due to “doctors’ orders”:

“I’m going to follow the docs’ orders. Not just for me but for the country. And that means I’m not going to be holding rallies.”

But, Biden says he prefers attending public rallies because, there, he can “sense” what people want “by the look in their eyes” and their “plaintive voices”:

“I’d much rather be out there with people because that’s where I get the greatest feel. I can get a sense by the look in their eyes, by the plaintive voices that they have of what they’re concerned about.”