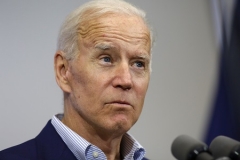 Asked why he hasn’t pushed House Democrats to compromise with Republicans in order to pass a coronavirus-relief bill, Biden argued that taxpayer money from the Democrats’ bill could be used to bail out cities and states that have spent more than they’ve taken in:

Moderator: “Let me follow you up, Vice President Biden. You are the leader of the Democratic Party. Why have you not pushed the Democrats to get a deal for the American people?”

Joe Biden: “Well, I have, and they have pushed it. Look, they passed this act all the way back in the beginning of the summer. This is like -- it's not new. It's been out there. This H.E.R.O.E.S. Act has been sitting there. And, look at what’s happening. When I was in charge of the Recovery Act, with $800 billion, I was able to get $145 billion for local communities that have to balance their budgets, the states that have to balance their budgets so they don’t have to fire firefighters, teachers, first responders, law enforcement officers, so they can keep their cities and counties running.

President Trump responded by saying that the Democrats’ bill is predominantly a ploy to bail out mismanaged Democrat-run cities and states – and to spend money on things that have nothing to do with providing coronavirus relief:

“The bill that was passed in the House was a bailout of badly-run, high-crime, Democrat - all run by Democrats - cities and states.

“It was a way of getting a lot of money - billions and billions of dollars - to these. It was also a way of getting a lot of money from our people's pockets to people that come into our country illegally. We were going to take care of everything for them. And, what that does, and I would love to do that, I would love to help them, but what that does, everybody all over the world will start pouring into our country. We can't do it. This was a way of taking care of them. This was a way of spending on things that had nothing to do with COVID, as per your question, but it was really a big bailout for badly-run Democrat cities and states.”

It was at this point that Biden defended bailing out poorly-run states by claiming that “The Founders were smart: they allowed the federal government to deficit-spend to compensate for the United States of America”:

“If I get elected, I'm running as a proud Democrat, but I'm going to be an American president. I don't see red states and blue states. What I see is America. United States. And folks, every single state out there finds themselves in trouble. They're going to start laying off, whether they're red or blue, cops, firefighters, first responders, because -- teachers, because they have to balance their budget. And the Founders were smart: they allowed the federal government to deficit-spend to compensate for the United States of America."

Asked if he still supports raising the minimum wage to $15 an hour nationally, Biden said that this, too, could be a form of bailout:

Trump countered by saying that forcing financially-distressed small business to raise wages wouldn’t help them – and would even prompt them to fire many of their employees: