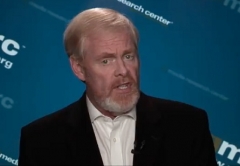 “The Big Tech Gestapo are at it again! Facebook, Google, and YouTube went insane yesterday and again shut down free speech, removing a viral @BreitbartNews video of a @TPPatriots event. Big Tech can’t be allowed to choose whose voice is heard,” Bozell tweeted on Tuesday.

The viral video featuring doctors citing statistics to propose potential treatments and to question the need for shelter-in-place and shutdown orders was censored for being dangerous, even though the social media giants continue to allow content by organizations that actually are violent, NewsBusters reports:

“After a video hosted by the Tea Party Patriots on Facebook went viral, Facebook, Twitter, and YouTube took down the video, which was a press conference hosted by America’s Frontline Doctors, even though it had been shared by President Trump and his son, Donald Trump Jr.  Both their Twitter accounts were censored. According to Breitbart, the video had 17 million views over the eight hours it was allowed on Facebook. Breitbart was also suspended from Twitter for sharing the video.”

“These tech companies arbitrarily apply their rules and standards only when it appears to hurt the conservative movement. Facebook still allows violent Antifa groups and pages on its platform. Iran still has accounts on Facebook and Twitter.”

Fox News’ Tucker Carlson, who played the video during his Monday program, said Tuesday that the only reason the video was pulled was that it dissented from the liberal narrative:

“The two doctors’ video was produced by a local television channel. It was, in fact, a mainstream news story. The video was not pornographic and didn't violate copyright or incite violence or commit libel – it didn’t break any law.

“The only justification for taking it down was that the two physicians on-screen had reached different conclusions from the people currently in charge. It was a form of dissent from orthodoxy.”

Carlson warned that Big Tech censorship of dissenting views has brought America to “a turning point”:

"When this is all over, it’s likely we'll look back on this moment, what YouTube just did, as a turning point in the way we live in this country, a sharp break with 250 years of law and custom."