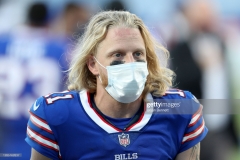 At least two Buffalo Bills players are buying tickets for fans who cannot attend home games at New York’s Highmark Stadium because the Bills will not allow ticketholders entry to games unless they provide proof they have received a coronavirus vaccine.

Last Tuesday, Beasley responded to a father who lamented that he had bought tickets to take his daughter to her first game, but later learned that he could not because he won’t get the vaccine, The Buffalo News reports:

“I always thought that Cole Beasley was a good guy, but man, this just puts him at the top of all NFL players for me,” said Chris Hauquitz, a 39-year-old father of five from Albuquerque, N.M., whose Twitter profile picture features his family in matching Bills pajamas in front of a Christmas tree.

Hauquitz told The Buffalo News that Beasley was working to get him tickets to the Oct. 10 game at Kansas City and explained that his refusal to get vaccinated was based on a combination of factors, including a lack of education about the Covid-19 vaccines.

In his post last Tuesday, Hauquitz tweeted directly to Beasley:

“@Bease11 sad day for me as a Buffalo fan. I was bringing my 10 year old daughter to her first game in December all the way from Albuquerque. Already bought tickets. I won’t get the shot so now I don’t know what to do. I probably need to sell the tickets and find an away game.”

“If you find an away game you are able to go to then I will buy the tickets for you guys,” Beasley replied. “DM me names and everything snd (sic) I’ll figure out the best way to make it happen. Wish she could witness the mafia!” (Buffalo Bills “Mafia” is a name adopted and made famous by a group of hardcore Buffalo Bills fans.)

“Another Bills fan was disappointed to see the vaccine mandates implemented at home games, and Buffalo long-snapper Reid Ferguson offered him free tickets to an away game,” The Blaze reports:

"Well damn. Was so excited to see the @BuffaloBills play at home for the first time ever, especially being from Nebraska. But I guess the new rules for the stadium will keep me out. I guess I'll have to watch @SnapFlow69 from the parking lot if I even go to Buffalo now," the fan wrote on Twitter, and tagged Ferguson on the tweet.

Ferguson replied, "I hear you brother. If you can find your way to an away game this year, tix are on me."