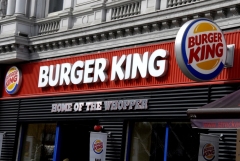 “Women belong in the kitchen,” Burger King tweeted on Monday.

Immediately afterwards, Burger King followed up with posts explaining that its provocative tweet applied only to women who “want to” belong in the kitchen – and that it is launching an effort to “change the gender ratio” in the restaurant industry:

“If they want to, of course. Yet only 20% of chefs are women. We're on a mission to change the gender ratio in the restaurant industry by empowering female employees with the opportunity to pursue a culinary career. #IWD”

“We are proud to be launching a new scholarship programme which will help female Burger King employees pursue their culinary dreams!”

The tweets were posted on @BurgerKingUK, but have yet to appear on the fast food franchise’s @BurgerKing Twitter page, though Ad Week reports that the company ran a full-page print ad sporting the comment in the Monday edition of The New York Times.