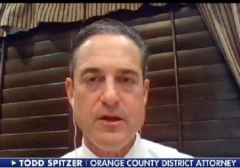 Orange County, California District Attorney Todd Spitzer says he’s calling out the court for using the coronavirus pandemic to justify releasing seven convicted sex offenders who were in jail for violating their parole requirement to be tracked by a GPS device.

On Friday, D.A. Spitzer explained in an interview on Fox & Friends First that the court had released seven “convicted, high-risk sex offenders” who were in jail for attempting to avoid detection:

“Yeah, I did call out the court for releasing seven convicted, high-risk sex offenders who were failing to report for parole. What were they doing?”

“In this case, we have sex offenders who are on electronic bracelet, so we can know where they are, the parole agents can know.

“These are people who go out and commit violent sex acts against innocent victims. And so, in this case, I called the court out on it.”

On Tuesday, D.A. Spitzer issued a press release warning the public about the release of the seven sex offenders back into the community by an appointed court commissioner.

In it, Spitzer explains that the seven had been released after serving just days of the six month sentence required by California law:

“The Orange County District Attorney’s Office is issuing a warning to county residents about seven high risk registered sex offenders who have been released from jail months early despite being charged with cutting off their GPS monitors or otherwise tampering with the tracking devices to render them inoperable.

The district attorney notes that the seven had been convicted of a range of sex offenses, including child molestation:

“Since April 7, 2020 seven registered sex offenders – with crimes ranging from indecent exposure and sexual battery to child molestation – have been released as a result of rulings by appointed Court Commissioner Joseph Dane.”

“These people shouldn’t be released to the street; they should be locked up and put in our jail,” D.A. Spitzer told Fox & Friends First.

Since April 5, an estimated 3,174 California inmates have been released due to COVID-19 concerns, according to the California Board of State & Community Corrections, Fox News reports.

Spitzer attributes the rampant release of inmates in California to “a ruse on the American people” by a movement promoting the belief that virtually no one should be incarcerated:

“What’s happening, though, is that I think there’s been a ruse on the American public about freeing our jails, and there’s actually been an advancement of a social policy to not incarcerate. There is a movement in the United States today not to incarcerate just about anyone and that everybody can be rehabilitated.

“I’m here to tell you: sex offenders cannot be rehabilitated – and, when they’re trying to avoid detection, like they are here in Orange County, they need to be locked up. And, we need to protect the public.”