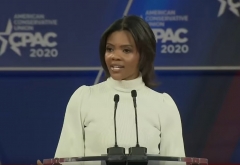 In Sunday night tweet, Owens said the race-based theory being taught in public schools nationwide is “the new Jim Crow” and should be banned:

“If you’re looking for institutional racism, it exists within Critical Race Theory.

“Ban it. At every level.

“I think it really is time to talk about pulling kids out of school. And I am not being funny,” Owens says in a video she posted to her YouTube account last week:

“When you study World War II and you study exactly what Hitler Youth was and what they were trying to do to make sure that the children that were being produced in the school systems and in Germany were coming out with these perspectives that would only help the government grow, that is what is taking place in America right now.”

Public schools are brainwashing school kids to turn them into “warriors for the government” and its dangerous ideology, Owens says:

“These kids are being informed, they are being polluted with these perspectives that are not true, because they want these kids to come out of school and they want them to be warriors for the government – because that’s what they are doing.

“They know that, when they are rioting and looting and Maxine Waters is saying they want them to be soldiers for the government,” Owens said, declaring Critical Race Theory “a dangerous ideology.”