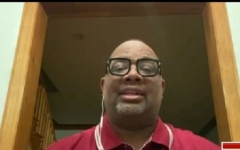 New Beginnings Church of Chicago Pastor Corey Brooks called for a three-step response to the violence in his city that took the lives of 13 people, including a one year-old child, last weekend.

First, his community needs to end its “no snitch” policy, Pastor Brooks said in a Monday interview with Fox & Friends First:

“Well, we’re definitely not doing enough. We have to take some responsibility ourselves. In our community, we have a ‘no snitch’ policy and we have to get rid of that policy – that’s the first thing.”

Next, citizens who know the streets and are able to discourage violence need to become more active, and more mentorship programs need to be immediately instituted, the pastor said:

“And, the second thing we have to do is get violence interrupters and violence intervention actively engaged in the lives of these young men and on the streets.

“And, then the third thing we need to do is get mentoring programs really going early on, if we’re ever going to defeat this violent surge that we see every single day in our community.”

“We have to get more violence interrupters involved, violence engagers, those individuals who know about the streets, those individuals who know the shooters. We’ve got to get them involved, we’ve got to get them engaged and we need to do it immediately. And, the more we can get the better. We can’t wait on police officers to do all of the work for us. We have to engage our community and do a lot of the work ourselves.

“We do need all hands on deck, but we need to get everybody more engaged, because every single day we’re experiencing violence in the city of Chicago and it’s very, very disheartening.”