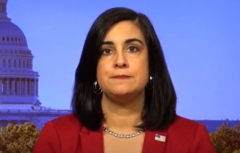 In her one-minute video posted on social media, Rep. Nicole Malliotakis (R-NY) explains why all Americans should be concerned about a bill introduced in the House on Thursday.

Rep. Malliotakis begins by revealing that House Democrats have introduced a bill to pack the U.S. Supreme Court by adding more justices:

“The reason I’m standing here is because I want to talk to you about what the Democrats have done today. The scariest bill that has been introduced since I’ve become a member of the House of Representatives is the bill they introduced today to stack the Supreme Court and change the number of judges from 9 to 13.”

“Now, why should you be concerned?” she asks.

Packing courts is a play right out of the socialist handbook.

Hugo Chavez packed Venezuela’s Court from 20 to 32 judges to tilt 45,000 rulings in his favor and destroy a nation.

We can not and will not allow it here. pic.twitter.com/1nK92pdlEb

Rep. Malliotakis then explains that the same court-packing scheme destroyed the wealthiest, most prosperous country in South America:

“Well, in 2004, Hugo Chavez of Venezuela did the exact same thing. This is a play right out of the Socialist handbook. It should concern you that Hugo Chavez took the wealthiest country in South American, a very prosperous nation, and destroyed it.

“And, part of the tactic he used was changing the makeup of the court, from 20 justices to 32, to make sure that he could have all these challenges that were brought to the court ruled in his favor.”