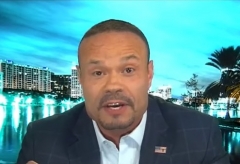 “The greatest political scam in the last 50 years has been the media perpetrating the myth and falsehood that the Democrat party is on the side of the minority community. This is ridiculous,” Dan Bongino said Wednesday during an appearance on Fox News Channel’s “Hannity.”

Addressing President Donald Trump’s decision to deploy law enforcement to guard federal property in violence-plagued cities like Chicago, the conservative commentator and former Secret Service agent praised the president for not taking the advice of those telling him to let Chicago continue to suffer the consequences of the anti-police polices of its Democrat leaders:

“You know how easy of a decision that could have been for him?  And he didn't. I was proud of him today, Sean. He came in there and said ‘No, not on my watch.’”

Watch Fox News’ @dbongino: “The greatest political scam in the last 50 years has been the media perpetrating the myth and falsehood that the Democratic party is on the side of the minority community. This is ridiculous.” pic.twitter.com/8QVOKADLv0

Bongino said he performed a Google search to learn more about the recent shooting of a three-year-old girl in Chicago – and was appalled to discover that Chicago had more than one in recent weeks:

“And, you know, as I was preparing for this segment earlier, Sean - not a joke - I wanted to follow-up on a three-year-old girl who was shot in the face in Chicago. So, I Googled it. It's on my phone. It's right there. And, it turns out you have to go through which three-year-old girl - because there's not just one.”

“I'm not kidding, Google ‘three-year-old shot in Chicago’ - and you have to find the right one.”

On July 1, Block Club Chicago reported that a 3-year-old girl was shot in Englewood, making her the “fourth child age 3 or younger shot in Chicago in the last 10 days, with two of them dying”:

“On June 22, another 3-year-old girl was wounded when a bullet grazed her in Chicago Lawn. That girl, like the girl shot Tuesday, was playing outside when someone in a car opened fire.

“And on June 20, 3-year-old Mekhi James was shot and killed in Austin when someone fired shots at his father’s car.”

CBS Chicago, Chicago’s local ABC affiliate, and WGN TV are among the other news outlets that have reported the shootings.

“Thank God President Trump has the cojones to go in there and do the right thing and say, ‘No, not on my watch,’” Bongino concluded.