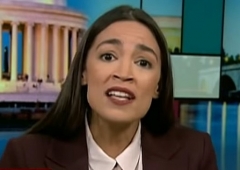 “Now she is investing heavily in her online store, selling T-shirts, sweatshirts and other merchandise with her name, "AOC" initials or slogans including "Tax the Rich" and "Fight for our Future," efforts aimed at both fundraising and building the second-term lawmaker's profile nationally.

“Her campaign paid political merchandise firm Financial Innovations, which operates her online store and supplies merchandise, more than $1.4 million in the first six months of 2021, according to campaign disclosures to the Federal Election Commission late last week.”

Ocasio-Cortez replied by defining capitalism as a ruthless, destructive system and declaring that “transactions aren’t capitalism”:

“Not sure if you know this Sean, but transactions aren’t capitalism.

“Capitalism is a system that prioritizes profit at any & all human/enviro cost.

The actual foundation of capitalism is private, instead of government, ownership of business, Spicer replied, before inviting her to appear on his Newsmax program to debate the issue:

“Thanks 4 the reply: 1. actually the definition of capitalism is based in private (not gov) ownership 2. I think u have commented more about this than #Cuba PS - can you come on #spicerandco @newsmax at 6pm to discuss? PSS -pls tag me in the future so I can respond quicker Thanks”

Spicer’s description of capitalism is correct, according to Merriam-Webster’s definition: