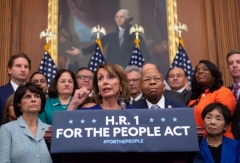 Democrats’ so-called “For the People Act,” H.R. 1, contains at least seven provisions that are definitely unconstitutional, some of which have already been declared so in court rulings – and there are probably many more – analysis by Cato Institute Senior Fellow Walter Olson reveals.

“H.R. 1 is the sprawling omnibus bill passed by the House on party lines that would assert federal control over dozens of areas related to elections, political speech, official ethics, and topics further afield,” Olson explains in a piece titled, “How Many of H.R. 1’s Provisions Are Unconstitutional?”

Olson’s answer: “Quite a few.”

This last provision is “a grab bag of progressive proposals” that liberals have pushed for years, which have failed to survive legal challenges. It is nearly identical to a 2018 Maryland law overturned by a Fourth Circuit panel that declared it “a content‐​based law that targets political speech” and a “compendium of traditional First Amendment infirmities.”

Olson closes by concluding that Democrats appear completely undaunted by the unconstitutionality of their H.R. 1 bill:

“To put it bluntly, the sponsors of H.R. 1 won’t even drop the parts of their bill that courts have already declared unconstitutional. I wonder whether they’re even trying to convince the rest of us.”