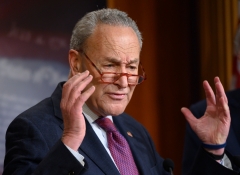 On Thursday, the same day their effort to eliminate the Senate’s filibuster rule appeared to receive the death blow, Democrat senators employed the filibuster to prevent a Republican bill from coming up for a vote.

The Republican bill to slap sanctions on Russia’s Nord Stream 2 natural gas pipeline to Germany failed to gain the 60 votes necessary to overcome the filibuster, despite bipartisan support, The Hill Reports:

“The vote on the Nord Stream 2 pipeline, which will carry gas from Russia to Germany, comes at a delicate moment for White House as it navigates renewed tensions with Moscow over its buildup of troops on the border with Ukraine.”

Without the Republican bill placing the pipeline sanctions to discourage Russian aggression, Ukraine could be wiped off the map, Texas Senator Ted Cruz (R) warns.

The Ukrainian government supports the bill and opposes the pipeline, which would deprive it of the natural gas transit fees it currently imposes on Russia for moving natural gas across Ukraine.