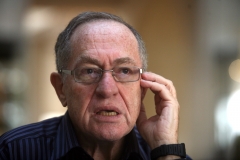 In Banana Republics like Cuba, when an administration takes power, it persecutes the losing candidate and everyone connected to him, iconic Civil Rights Lawyer Alan Dershowitz said Sunday.

“That’s happening in America right now,” the former Harvard Law professor warned in an interview with WABC 770 AM discussing last week’s FBI raid of the home of once-lawyer to former President Donald Trump:

“They're going after Rudy Giuliani” now, but “Who knows who will be next?" Dershowitz said.

“It’s just not constitutional” for the government to use a search warrant to obtain privileged information, Dershowitz explained:

“And they’re going after him in inappropriate ways. A search warrant on a lawyer? Or a doctor? Or a priest?

“You don’t use search warrants when people have privileged information on their cell phones or in their computers. You use a subpoena. The difference of a subpoena and a search warrant is like night and day. A subpoena is: the lawyer gets a request, he’s told to turn over certain documents, if he thinks it’s privileged, he goes to court, they have it out, they have a decision.”

“But, here, they’re going after him, they’re searching, they’re taking everything from his cloud, from his computers – including privileged information: it’s just not constitutional.”

“Sure, I’ll help out. I’m in favor of the Constitution,” Dershowitz responded when Giuliani asked for help with his defense:

“You might not like Rudy, you might not like Trump – it doesn’t matter. You should be protesting the overreach of the government, when they use search warrants like this broadly to get information that may very well be privileged,” Dershowitz said, warning that, if all Americans don’t fight back against the government’s violation of Giuliani’s rights, soon “They’ll be going after you and your friends”:

"Whatever side you’re on – Democrat, conservative, liberal, whatever – you’ve got to fight back against this. Because, today, they're going after people that, maybe, you don't like. Tomorrow, they'll be going after you and your friends. The one lesson we've learned from history is you can't have freedom of speech for me, but not for thee. You can't have due process for me, but not for thee."

"I think the government made a serious mistake here when they went by search warrant. They gave Rudy Giuliani lots of legal arguments to make, arguments that I think he can prevail on. And it's not just Rudy, it’s everybody.