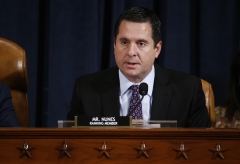 As the Trump-Russia narrative collapses and evidence mounts that the investigation into the Trump campaign was politically-motivated and baseless, the “Media Russia Hoax Rats” who pushed the narrative are panicking, Ranking Member of the House Intelligence Committee Rep. Devin Nunes (R-Calif.) says.

“There are hundreds of rats that were on the Russia Hoax Ship” – and “very few” genuine investigative journalists looking into how and why the government began investigating the Trump campaign, Rep. Nunes said Tuesday in an interview on the “America First with Sebastian Gorka” show.

And, as more and more holes are being punched in the Russia Hoax Ship, causing it to sink, the media rats are scurrying, Nunes said:

“I haven’t seen the evidence that would justify an investigation into the Trump campaign, at all – because it was made up by the Clinton campaign. Those are just the facts.”

“I really see the walls are closing in, if you follow the media – what I call the 'Media Russia Hoax Rats' – you know, some of them are panicking. And, they’re lashing out – every time something happens, they lash out.

“But, the bottom line is is that those few journalists that are out there, that’s real investigative journalists, the very, very few that actually got to the bottom of the Russia hoax – they’re turning out to be right.”

What’s more, journalism in America has become so tainted by liberal political bias that even its coveted Pulitzer Prize has been tarnished to the point that “We need to figure out a new award” to honor the work of the few remaining legitimate journalists, Rep. Nunes said:

“I think that it’s really tarnished the name of the Pulitzer. We need to figure out a new award, for these journalists who have done a hell of a job.”