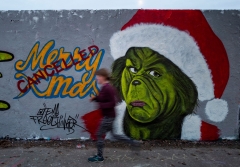 The educational arm of the Southern Poverty Law Center (SPLC) has bullied a Virginia school district into cancelling any mention of beloved children’s book Author Dr. Seuss on a pro-reading day established by National Education Association (NEA) to honor his birthday.

Every year since 1998, schools have celebrated “Read Across America Days” on Seuss’ birthday, March 2. But, the Loudon County, Virginia school system will snub Seuss this year, bowing to the demands of SPLC’s “Learning for Justice” activists, The Daily Wire reports:

“Learning for Justice — a left-wing educators group — is demanding that Dr. Seuss be canceled. A prominent Virginia school district has taken marching orders and ordered its schools to avoid “connecting Read Across America Day with Dr. Seuss.”

“Loudoun County Public Schools, one of the nation’s most affluent school districts, announced that it will no longer recognize Dr. Seuss on his birthday. In an announcement obtained by The Daily Wire, the school district said that Dr. Seuss’s children’s books contain “racial undertones” that are not suitable for “culturally responsive” learning.”

As evidence against Seuss, Learning for Justice has cited a study titled “The Cat is Out of the Bag: Orientalism, AntiBlackness, and White Supremacy in Dr. Seuss,” which claims that:

“Some of Dr. Seuss' most iconic books feature animal or non-human characters that transmit Orientalist, anti-Black, and White supremacist messaging through allegories and symbolism. These books include ​The Cat in the Hat​; ​The Cat in the Hat Comes Back​; ​The Sneetches​; and ​Horton Hears a Who!”

One of the study’s criticisms, for example, is that the cat character in The Cat in the Hat books is racist because his mouth is open to many times:

“The Cat’s mouth is also depicted as open wide on fifteen of the nineteen pages he is present. Nel cites Sianne Ngai’s research that explains, ‘the mouth functions as a symbolically overdetermined feature in racist constructions of Blackness.’”